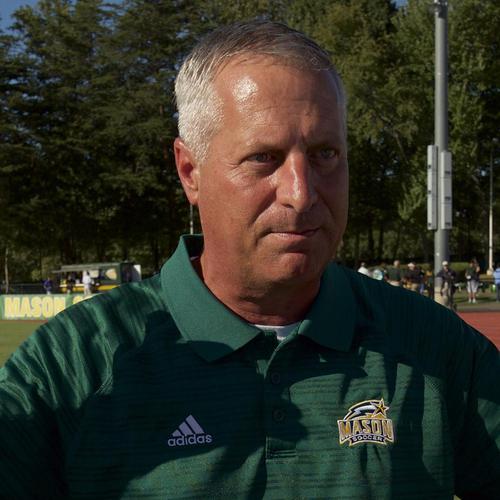 Todd Bramble was announced as the fourth head women’s soccer coach in the program’s history on March 6, 2015. Bramble begins his fifth season leading the Patriots in 2019.

In 2018, Bramble led the Patriots to a 14-6-0 overall record and an 8-2-0 mark against Atlantic 10 opponents. The 14 victories were the most for the program since the 2009 season and tied for fourth-most in program history, while Mason's eight conference wins were the most since joining the A-10. Mason finished the campaign with a record of 8-2-0 at home, including a mark of 5-1-0 against conference opponents at George Mason Stadium.

Bramble guided Mason to its third straight nine-plus win season (9-9-2) in 2017, including a 6-2-2 regular-season record against Atlantic 10 opponents. The Patriots finished third in the A-10 after posting a mark of 9-2-2 over the final 13 regular-season games of the 2017 campaign, returning to the Atlantic 10 Tournament for the second straight season.

In 2017, Bramble led the Patriots to a 4-1-1 record at home against the Atlantic 10, outscoring opponents by a combined score of 11-6. The Patriots scored 32 goals during the season and were strong defensively, allowing two or fewer goals 16 times.

In 2016, his second season at the helm of the Patriots, Bramble guided the team to a 13-7-1 overall record and a 6-3-1 mark against Atlantic 10 opponents. Mason recorded three winning streaks of at least three games, including a season-high five-game winning streak Sept. 11 – Oct. 6.

Mason earned the No. 4 seed in the 2016 A-10 Championship and defeated fifth-seeded Fordham 2-1 in overtime in the quarterfinals. The Rams entered the tournament with only one conference loss during the season. The Patriots have earned a spot in the Atlantic 10 Championship tournament and advanced to the semifinals in each of Bramble’s first two seasons as head coach.

The Patriots offense scored 39 goals over 21 matches, recording the second-most goals by any team in the Atlantic 10 Conference during the 2016 season. Mason finished as the third-highest scoring team in the A-10, averaging 1.86 goals per game.

The Patriots had 10 players score at least one goal and seven players tallied at least one game-winner. Mason finished with a record of 9-0-1 when netting the first goal of a match and went 8-1-0 in games decided by a single tally.

Bramble’s team notched 13 victories in 2016, the most by the program since the Patriots finished with a 14-4-1 record in 2009. With a conference record of 6-3-1, the Patriots posted more wins against Atlantic 10 foes in 2016 than in any of their first three years in the conference.

The Patriots finished the 2016 season with a 7-3-1 record at George Mason Stadium. The seven home wins were the most for Mason since 2011 and the fifth-most at home in program history.

Mason’s five road victories were the most the team has registered since joining the Atlantic 10 and tied for the third-most road wins in program history. The Patriots won three straight road games in a season for the first time since 1997 (5-2 at Maryland Sept. 11, 2-1 at UNCW Sept. 16 and 2-1 at Massachusetts).

In his first season guiding the Patriots in 2015, Bramble more than doubled Mason’s win record from 2014 and returned the Patriots to the Atlantic 10 Conference Tournament with an overall record of 9-9-2 and a conference record of 4-5-1.

Mason earned the No. 8 seed in the A-10 Championship and opened play facing Revolutionary Rival and top-seeded George Washington. The Colonials entered the tournament undefeated in conference play with a perfect 10-0 record. Having fallen to GW in the regular season in double-overtime, Mason avenged the loss defeating GW 1-0 in the quarterfinal round, knocking out the No. 1 seed. The Patriots fell in the semifinal round to Fordham.

Prior to his arrival in Fairfax, Todd Bramble spent seven seasons as the head coach for the SEC's Alabama Crimson Tide. He joined George Mason after finishing the 2014 season at Alabama with a 10-7-3 record, his 14th season overall as a head coach. He spent the previous seven years at Clemson University (2001-07) prior to joining the Tide. He owns a career record of 146-125-32 in his 15 years as a head coach for NCAA DI women’s soccer and has eight appearances in the NCAA Tournament, including two NCAA round of 16.

The Atlanta, Ga., native led Alabama to an appearance in the 2011 NCAA Tournament - its first NCAA tournament berth since 1998 and the second in program history. He also guided the Tide to its first winning record (10-9-3) since 2003.

In his first season at the helm of the Crimson Tide in 2008, Bramble immediately made his mark, leading Alabama to a 9-9-2 overall record and a 4-6-1 mark in SEC play. The four league wins were the most by any Alabama team since 2004 and the Tide earned its first appearance to the SEC Tournament since 2004.

Alabama was able to accomplish some program firsts during his tenure, including the first-ever victory over nationally-ranked Florida, which came in 2012, as well as downing three ranked opponents in one season for the first time in program history in 2011.

Bramble has now coached 16 All-SEC performers, including three in 2014, 2011 and 2010 - the most in one season in program history. Furthermore, he has had at least one player earn all-region honors in four consecutive years, which matches the longest streak in program lore.

During his seven seasons at the helm of the Crimson Tide program, Bramble has produced three Academic All-Americans, including two this past season, making Alabama the only school in the nation with two players on the first and second CoSIDA Academic All-American squads in 2014. The National Soccer Coaches Association of America (NSCAA) named the Crimson Tide to its College Team Academic Award list for an unprecedented sixth straight year in 2014.

During Bramble's tenure at Clemson, he took the Tigers to the NCAA Tournament every season, reaching the NCAA quarterfinals once and the NCAA round of 16 twice. His teams finished in the top 25 nationally five times and placed in the top three in the Atlantic Coast Conference three times. The Tigers had 18 wins over top-25 teams at Clemson, including top-five wins on the road in 2004 at fourth-ranked Texas and fifth-ranked Texas A&M. Bramble had an 80-51-17 overall record with no losing seasons at Clemson.

Clemson teams during the Bramble era had an equally impressive record in the classroom, posting a 3.0 or better cumulative team grade-point average all 13 semesters that he led the team and a 3.25 or better team GPA for seven consecutive semesters. Seven NSCAA All-Academic selections played under Bramble.

Bramble served as the top assistant under Clemson head men's soccer coach Trevor Adair from 1995-99. The Tigers had three top-12 seasons while reaching the NCAA Tournament quarterfinals twice and the round of 16 three times in those five seasons. The 1998 team finished with a 22-2 overall record and a No. 1 final regular-season national ranking, also winning the ACC Championship that season.

Bramble also has coached at the international level, as an assistant coach for the United States Under-17 National Team that competed in the 1999 U-17 World Championships.

Bramble received a degree in business management from Mercer University in Macon, Ga., in 1995. He was an all-conference goalkeeper at Mercer before spending one year in the National Professional Soccer League with the Memphis Rogues (1989-90).

Bramble has a son, Cole and a daughter, Morgan.