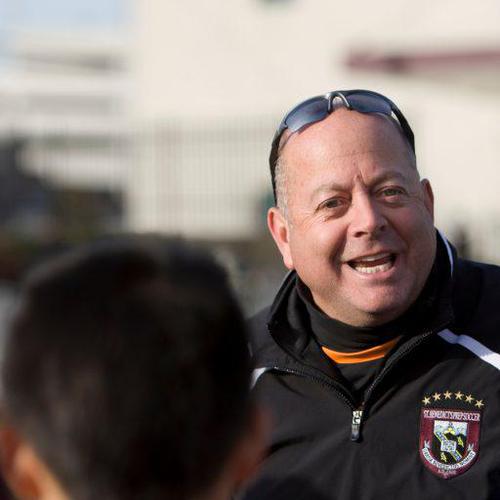 Rick Jacobs has coached and mentored hundreds of young men over the past 40 years by providing a foundation that has been rooted in the core belief, that in order to become a great athlete you need to dedicate yourself to being a great person first. Rick has delivered his messaging by helping athletes develop their own Championship Culture and he believes that this is where true greatness can be sustained; in both sport and life.

The highlight of Rick’s coaching career was his unprecedented 25 year run as the Head Boys Soccer Coach, at St. Benedict’s Prep., in Newark, NJ. His Championship Culture resulted in 23 Prep or Parochial State Championships, Six #1 Ranked High School Teams in America, crowning them as “Mythical” National Champions, a 131 game unbeaten streak and a final record of 519 Wins – 27 Losses – 17 Ties. United Soccer Coaches (formerly the National Soccer Coaches Association of America) still recognizes him as the coach with the all-time highest winning percentage in High School Boys Soccer at a staggering 94%.

He has coached World Cup and Olympic team members and captains, Pan American team members, as well US National Team members from ages U-15 – to full Men’s National team status. His players have gone on to play in the world’s most competitive leagues; including the English Premier League, German Bundesliga, Scottish Premier League as well as Major League Soccer (MLS). He has coached countless high school and college All-Americans as well as High School and College National Players of the year. Former players include Claudio Reyna – voted college soccer’s #1 player of all time and current US Men’s National Team Coach, Gregg Berhalter.

He is currently the Director of Business Development at ESF and as a Master Coach has helped create and deliver a leadership curriculum to both staff and campers. He has supported ESF regionally at NJ sites as well as the Pro Sports Camps products. Rick was also instrumental in developing SportsLab, ESF’s multi-sport platform powered by Under Armour.