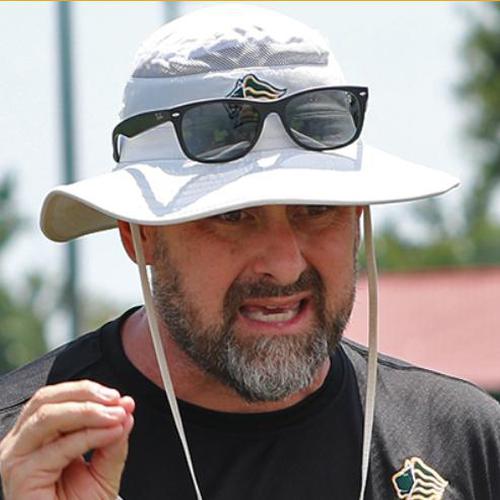 "We are excited to have Dr. Peter McGahey as our new women's soccer coach. His great success in Division II, success at Division I, as well as his association with US Soccer, established him as the best all-around candidate in our selection process," University Vice President and Director of Athletics Francis X. Reidy said.

"I'd like to thank Mr. Reidy for the opportunity to lead the Saint Leo women's soccer program," Dr. Peter McGahey mentioned. "From the moment you step on campus, you know that Saint Leo is a special place. There are championship expectations at Saint Leo on the field and in the classroom!"

McGahey amassed a 124-76-25 record as head coach at Minnesota State, Mankato, and Central Michigan. The 11-year coaching veteran has guided his programs to 10 NSCAA Team Academic Awards and four NCAA postseason appearances. He led his Mavericks to back-to-back 17 win seasons in 2011 and 2012 and recorded his best season of 15-3-3 with the Chippewas in 2016, which saw CMU fall in the Mid-American Conference Semifinals to Kent State.

Reidy continued, "The entire staff looks forward to working with Coach McGahey to get our women's program back to the top tier of the SSC and once again part of the NCAA post-season. We are thrilled to have Peter along with his wife Dawn, daughter Ella and son Will join us to kick-off 2019."

McGahey added, "I am excited to be back leading a program at the Division II level and grateful to be a part of the proud tradition of Saint Leo women's soccer. I am looking forward to building our student-athlete centered program into a conference, regional and national power."

A Denver, Colo. native, McGahey holds two Bachelor of Arts degrees, from the University of Denver a B.A. in Communication and from Metropolitan State College of Denver, a B.A. in Human Performance and Sport. He received his Masters of Arts in Physical Education (Coaching) from Ball State University and most recently his Doctorate of Education (Educational Leadership) from Minnesota State University, Mankato. McGahey was a four-year player on the men's varsity soccer team at the University of Denver from 1992-96.