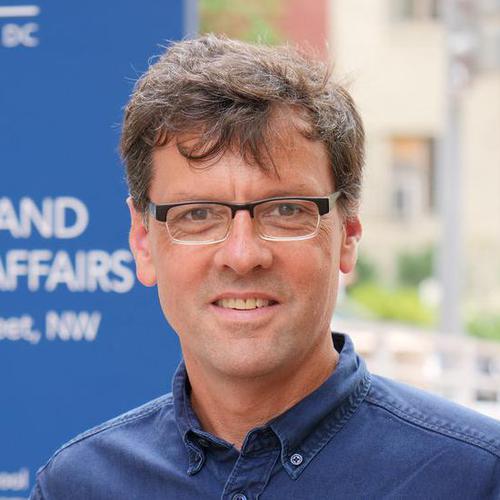 How Soccer can Help you Succeed off the Field

Peter Loge has over 25 years of experience in communications including a presidential appointment at the Food and Drug Administration and senior positions for Sen. Edward Kennedy and three members of the U.S. House of Representatives. He currently leads the Project on Ethics in Political Communication at the School of Media and Public Affairs. His book “Soccer Thinking for Management Success: Lessons for Organizations from the World’s Game” debuted as a #1 new release on Amazon.

Loge has led and advised a range of campaigns and organizations, put the first member of Congress on the internet, lobbied for “America’s Funniest Home Videos” and served as a senior policy advisor for health care in the House of Representatives during the debate over the Affordable Care Act. His eclectic career also includes a solo-show of his sculpture in a Washington, D.C. gallery, and appearances as a political satirist on NPR.

Prior to joining the full-time faculty at SMPA, Loge served as a senior advisor to the commissioner of the Food and Drug Administration in the Obama administration, a presidential appointment. In this role, he developed and helped lead the strategic communication efforts for some of the top White House and FDA health priorities including the Cancer Moonshot, the Precision Medicine Initiative and combating the opioid crisis.

From 2013 – 2015, he was the first vice president for external relations at the United States Institute of Peace (USIP) where his portfolio included congressional relations, intergovernmental affairs, communications, development and the Global Peacebuilding Center. He was also part of the organization’s senior management team and the interim liaison to the USIP board.

Before USIP, Loge was the founder and principal at the legislative strategy firm Milo Public Affairs LLC, where his clients ranged from AmericaSpeaks and “America’s Funniest Home Videos” to the World Wildlife Fund and WickedCoolStuff.com.

In 2009, he took a leave of absence from Milo Public Affairs to serve as a senior adviser to former Rep. Steve Kagen (D-Wis.) on health care reform. Peter helped Rep. Kagen, a doctor and second-term Democrat from a Republican district, shape and promote his health care agenda. Peter also managed the Congressional Business Owners Caucus, a group of over 50 Democratic representatives who owned businesses before coming to Congress.

Before launching Milo Public Affairs he was a senior vice president at M+R Strategic Services, national public affairs, and political consulting firm. At M+R, Loge directed the media relations team and provided strategic counsel to a wide array of clients including the Save Darfur Coalition, Human Rights First, and the Caucus for Producers, Writers & Directors. Before joining M+R, he served as the first director of The Justice Project, which helped redefine the national death penalty and criminal justice debate.

Loge has extensive experience in communications and political strategy including serving as a regional field director for the Concord Coalition, as the chief of staff, press secretary and campaign manager for Rep. Brad Sherman (D-Calif.), director of constituent services to former Rep. Sam Coppersmith (D-Ariz.), and deputy to the chief of staff to the late Sen. Edward Kennedy (D-Mass.). Peter managed Sherman’s first re-election campaign, made Coppersmith the first member of Congress with a presence on the internet in 1993, and, while working for Sen. Kennedy, coordinated the first online chat with a federal elected official.

Loge was an adjunct instructor in the School of Media and Public Affairs at the George Washington University for more than a decade before joining the faculty full time. He regularly lectures on politics and lobbying in Washington and elsewhere, and is featured in the award-winning political documentary “Split: A Divided America.” He has been quoted in local and national media, provided analysis and commentary on the syndicated PBS program “White House Chronicle,” XM/Sirius, and other national media outlets and his writing have been published in the Drake Law Review, the edited volume Wounds that Do Not Bind: Victim Perspectives on the Death Penalty, the Journal of the Caucus for Television Producers, Writers & Directors, The Hill, the IJ Review, the International Forum for the Challenges of Peace Operations and others.