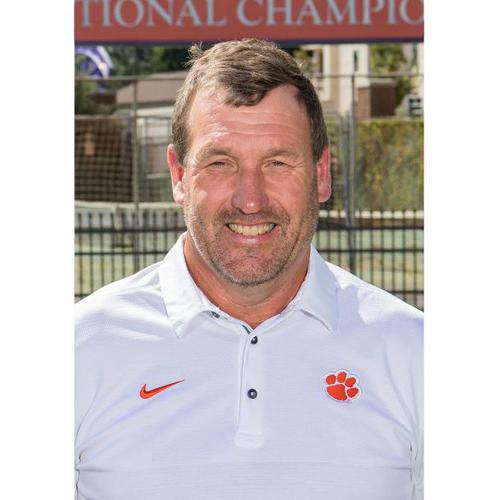 The Case for College Soccer

Head Coach Mike Noonan will begin his tenth season at the helm of the Clemson men’s soccer program in the fall of 2019. In his first nine seasons leading the Tigers, Noonan has brought the program back into the national spotlight. Clemson has reached the NCAA Tournament five of the past six years, including an NCAA Elite Eight berth in 2016 and a spot in the NCAA National Championship game in 2015, when the Tigers finished as the national runner-up. Noonan also led the program to an ACC Tournament Championship in 2014, and the team has reached the ACC Semifinals or better six of the past seven years.

Over the past six seasons, 11 of Noonan’s players have been selected in the MLS SuperDraft, including a school-record four who were taken in the 2016 draft.

Not only have Noonan’s teams been successful on the field, but they have also seen incredible success in the classroom. The Tigers have broken team grade point average records in five of the past six semesters, including the spring of 2016 when they set not only the spring semester GPA record, but also the program’s all-time GPA record, with a 3.50 cumulative team GPA. In the past eight seasons, Noonan has had 30 players named to the All-ACC Academic Team, including a record six in 2016. The 2018-19 school year saw 21 players named to the ACC Honor Roll, which requires athletes to have a 3.0 GPA for the entirety of the school year.

Community relations is also a priority for Noonan and his teams and was something the Tigers were acknowledged for in 2015-16 when they earned Clemson’s President’s Pride Cup. The President’s Pride Cup is awarded annually to the Clemson athletic team that earns the highest point total based on three components: community outreach, academics, and athletics, with bonus points added for leadership as well as individual honors and contributions. The 2018-19 school year saw Noonan’s squad rank second in the nation for community service hours recorded amongst men’s soccer teams.

AT CLEMSON (2010-present) The 2018 season saw many youths enter into the Clemson program, with 18 players on the roster having less than two years of experience under their belt. Despite this fact, Noonan developed the squad to be one full of grit, with the team rolling off a string of quality performances throughout the early and late part of the season. Noonan also oversaw the continued dominance over in-state rival, South Carolina, as the team extended their win streak against the opponent to a staggering five straight years.

The Tigers’ had a successful campaign during the 2017 season, finishing with a 12-6-1 record and an appearance in the NCAA tournament’s round of 32. For their post-season success, the team solidified their placement in the post-season polls, receiving final rankings of 17thand 6thin the NSCAA and SA polls respectively. During this season, the program also brought in the second-ranked recruiting class in the nation, as determined by TopDrawerSoccer.

The 2016 season saw Noonan’s Tigers reach the NCAA Elite Eight, as well as the ACC Tournament Championship Game. Clemson finished the season ranked fifth nationally by the NSCAA, and No. 1 in the nation according to the final RPI of the year. Five Tigers earned All-ACC honors and three players were honored on the ACC All-Tournament Team.

In 2015, Noonan led the Tigers to the College Cup, where they finished as the NCAA National Runner-Up after falling to Stanford. Four players were named NSCAA All-Americans in 2015, and three made the College Cup All-Tournament Team. Seven Tigers earned All-ACC honors, including ACC Midfielder of the Year Paul Clowes and ACC Defender of the Year Kyle Fisher. Four players from Noonan’s 2015 squad were drafted into the MLS, highlighted by Andrew Tarbell, who was taken eighth overall by the San Jose Earthquakes.

In 2014, the Tigers won the ACC Tournament Championship, the program’s first ACC title since the 2001 season. The team also claimed a share of the ACC Atlantic Division regular-season title and advanced to the Round of 16 in the NCAA Tournament that season.

During the 2011 season, Clemson defeated No. 1 Maryland and No. 14 Boston College and tied No. 24 Duke in the ACC Tournament. In the last six matches of the campaign, the Tigers were unbeaten, going 4-0-2 to finish on a strong push that almost landed the program in the NCAA tournament. Clemson finished the year with an 8-8-2 record going 4-4 in the strong ACC. Clemson’s eight victories were the most since the 2006 campaign. The four ACC wins were the most since the 2000 season.

In 2010, Noonan led the Tigers to a win over 18th ranked Duke, a 1-0 decision over perennial power St. Louis and a 1-0 victory over arch-rival Furman in Greenville, SC. Of the Tigers’ nine losses, seven were by one-goal deficits.

Noonan became the Head Men’s Soccer Coach at Clemson University in January 2010. He is the program’s fifth coach in the 75-plus year history of Clemson men’s soccer. Noonan came to Clemson from Brown University of the Ivy League. In 2009, the Bears finished with an 11-3-5 record overall and advanced to the NCAA Tournament’s second round.

AT BROWN (1995-2009) Noonan compiled an impressive 160-77-31 record in 15 years at Brown. During his tenure with the Bears, Noonan, the fifth head soccer coach in Brown University’s 81-year soccer history, led the Bears to 10 NCAA Tournament berths, including NCAA Quarterfinal appearances in 1995 and 2000, eight Ivy League Championships, and the team’s highest national ranking ever (third) during the 1995 season.

Furthermore, 10 of Noonan’s players were selected in the annual Major League Soccer draft. All three members of Noonan’s class of 2005 signed contracts with the MLS at the conclusion of their Brown careers.

In 1999, the Bears finished second in the Ivy League and earned an at-large bid into the NCAA Tournament. Brown recorded its first NCAA opening-round victory since 1995 with a 2-1 overtime win against Rhode Island on Stevenson Field.

In 2000, Noonan led Brown to its fourth NCAA Tournament berth in as many years, as Brown became the first team in 20 years to finish a perfect 7-0-0 in Ivy play. The Bears qualified for the NCAA Quarterfinals for the first time since 1995, defeating Vermont, 2-0, and Duke, 1-0, to advance to the third round.

In 2001, the Bears earned a share of their second consecutive Ivy League title by posting a 5-1-1 league mark. The 2002 season was one of the most difficult years for the Bears as they were plagued with injuries all season long and dropped several close contests, finishing 5-8-4 overall. It marked the first losing season for Brown under Noonan.

In 2003, Noonan put Brown back on the map, as it retained a national ranking throughout the entire season, and advanced to the NCAA Tournament for the sixth time in his career. The Bears went undefeated in Ivy play, posting a 6-0-1 record en route to the League Title.

In addition, Noonan was named the New England Division I Coach of the Year. In 2004, Brown finished in a tie for second in the league standings before returning to its place atop the Ivy League in 2005, earning its eighth Ivy Title in the last 12 years. In 2006, the Bears received an At-Large bid into the NCAA Tournament and made it to the second round. They defeated Adelphi at home but lost to #1 Duke in the second round.

Brown closed out the 2007 regular season with a 15-2-1 overall record, including a perfect 7-0-0 mark in the Ivy League. It was the second time in seven years (2000, 2007) one of Noonan’s teams achieved an unblemished Ivy record. The 2007 squad earned the program’s 19th league title, and an automatic bid with a first-round bye to the Division I NCAA Tournament. The sixth-seeded Bears featured five players on the First-Team All-Ivy squad, including one who was a unanimous selection, and a sixth player who made the second team. Brown also swept the Player of the Year and Rookie of the Year awards for the first time in school soccer history.

AT NEW HAMPSHIRE (1991-94) Prior to his arrival at Brown, Noonan led the University of New Hampshire to an NCAA Tournament berth in 1994 for the first time in the school’s history, ironically losing to Brown in the first round at Stevenson Field. His Wildcats finished with a 15-5-2 record in 1994, playing 11 matches against top 20 teams, while setting a school record for victories. New Hampshire also captured the North Atlantic Conference’s regular-season championship that year.

Noonan compiled a 48-23-9 record in four years as head coach at New Hampshire and was the winningest coach in Wildcat history. He was the 1993 New England Coach of the Year, and in 1992 was named the North Atlantic Conference Coach of the Year.

AT WHEATON COLLEGE (1989-90) Prior to New Hampshire, Noonan served as the head soccer coach at Wheaton College from 1989 to 1990, where he was the first coach in the program’s history. He was also an assistant coach at the University of Vermont from 1986 to 1989, and an assistant coach at Bates College in 1983.

AS A PLAYER AT MIDDLEBURY COLLEGE A 1983 graduate of Middlebury College, where he was a four-year starter and two-time first-team All-American, Noonan embarked on a professional playing career in Sweden before returning to the United States to play for both the MISL and the AISA. He was voted to the AISA All-Star team in 1985.

Noonan and his wife, Deb Belcher, have two daughters, Caleigh and Meghan.