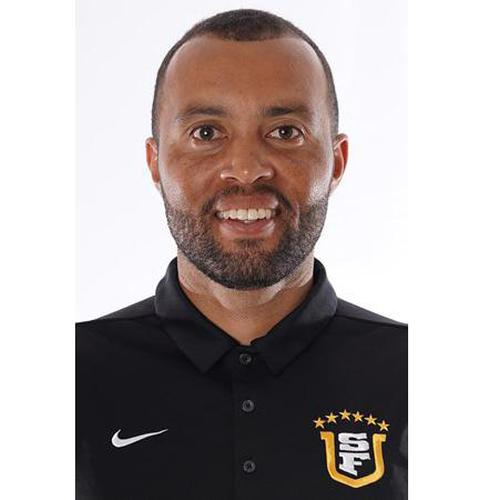 Identifying Space when Building out of the Back

On Thursday, April 11, 2019 University of San Francisco Director of Athletics, Joan McDermott named Leonard Griffin the sixth head coach in USF men's soccer's illustrious history. Griffin, a former All-American defender at UCLA who spent three seasons as the assistant coach at the University of Portland. Griffin follows Eddie Soto, Erik Visser, Gus Donoghue, Bob Braghette, and Stephen Negoesco. He inherits a program that has won five national championships, 35 West Coast Conference titles and produced 48 All-Americans. "Our men's soccer search was an exhaustive and thorough process," said Director of Athletics Joan McDermott. "We had many qualified candidates looking to become the next head coach of our storied program. In the end, Leonard Griffin was the obvious choice. His playing experience as both an All-American and as a professional player, along with his coaching experience at several very successful collegiate programs, makes him the ideal candidate to lead USF back to its lofty expectations. This is a program that has five national championships, and we feel that Leonard will help us compete for our sixth." Griffin, with eight years of Division I assistant coaching experience, has recruited, coached and developed 35 professional players in MLS, USL and abroad. In his first season as the Pilots' assistant coach, Griffin helped guide the team to a 2016 West Coast Conference Championship. He coached three Far West Region Team players and MLS players: Benji Michel (Orlando City), Paul Christensen (Atlanta United), Kris Reaves (FC Dallas) and Rey Ortiz (1st Team). Prior to joining the Portland staff, he spent two years at UCLA where the Bruins advanced to the NCAA College Cup finals in 2014. Griffin coached nine all-Pac-12 players, including 2014 MAC Hermann Trophy winner Leo Stoltz and 2015 Pac-12 Freshman of the Year Jose Hernandez. Griffin spent a season as an assistant coach at California in 2013, guiding Cal to a NCAA Quarterfinals appearance. At the time, the Golden Bears received the No. 4 overall ranking in the NCAA, which was the highest ranking in school history. Prior to Cal, Griffin spent three seasons as an assistant coach at Saint Mary's. There, he led the Gaels to the NCAA Elite Eight and a WCC Championship in 2011. Griffin attended UCLA from 2000-03. The 2003 All-American honoree led the Bruins to an NCAA title in 2002. Following his college career, Griffin spent six seasons with the Chicago Fire (2004-06), the Columbus Crew (2007-08), and the Los Angeles Galaxy (2006) while also playing professionally for the Portland Timbers (2007-08).