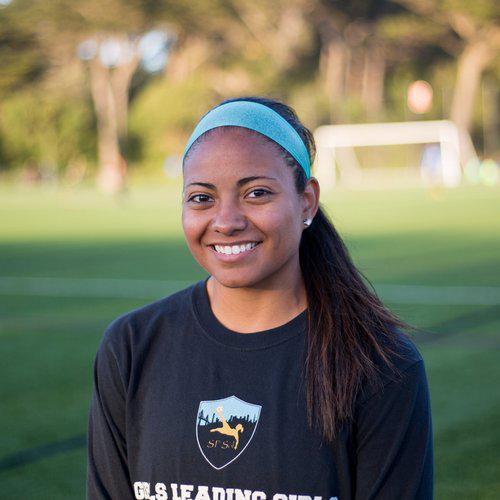 Karli is originally from Milwaukee, Wisconsin. She joined Girls Leading Girls in 2017 as a head coach and is now our Club program manager.

Karli has coached at the Julie Foudy Sports Leadership Academy (JFSLA) in New Jersey, Illinois, Georgia, and California every summer since 2011. She has worked with girls ages 9-18. At JFSLA, the coaches focus on teaching the girls soccer skills but also teaching them about leadership on and off the soccer field. Throughout the years, Karli has had the opportunity and privilege to learn under former national players, current professional players, college coaches, and club coaches.

In 2016, Karli was chosen along with nine other JFSLA alumni to represent the United States and the Julie Foudy Sports Leadership Academy in India. This opportunity was funded by the State Department. They were teamed up with Magic Bus, an organization that works with boys and girls in the slums across India. Abroad the JFSLA alumni had the chance to learn more about Magic Bus, visit the slums, and work with boys and girls on and off the soccer field.

Karli attended Loras College in Dubuque, IA where she majored in International Studies and Politics. In 2010-2011, Karli played soccer for Loras College, where they were conference Champions and made it to the second round of the NCAA tournament. She ended her soccer career after the season due to multiple ACL/meniscus surgeries. However, she then played lacrosse for Loras in 2013 and 2014. She was captain and was awarded Most Inspirational Player after the 2013 season.