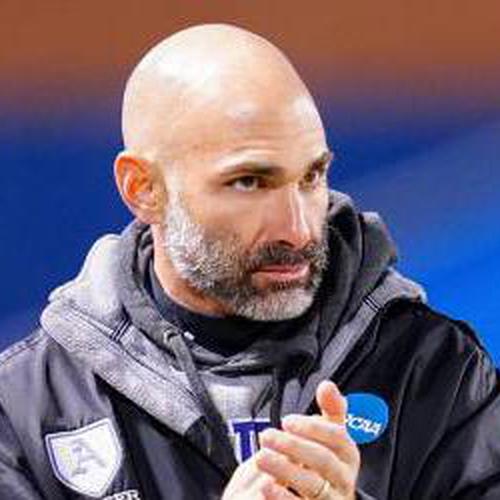 Having shaped Amherst into one of the premier teams in NCAA Division III men’s soccer, Justin Serpone returns to the sideline for his twelfth season in 2018. Currently, Serpone sits as the second-winningest coach (by percentage) of any active coach in NCAA history, regardless of division (.833).

In 2017, Serpone guided the Mammoths to an impressive 12-4-3 ledger and a 7-1-2 mark in conference play. Amherst also reached the NCAA “Sweet 16” for a ninth consecutive season which is the longest streak in DIII Men’s Soccer. The Mammoths finished the season ranked tenth in the final United Soccer Coaches ranking.

2015 was a historical season that culminated in the program’s first-ever national title. Serpone’s squad opened the memorable campaign undefeated and untied in its first 14 games of 2015, and from there earned a first-round bye in the NCAA Division III Championship. The Mammoths earned three straight victories to secure its place in the program’s third NCAA Final Four in Kansas City, Mo., and it's first since 2008. Amherst battled SUNY Oneonta to a 0-0 deadlock and eventually won the thrilling contest on penalty kicks, 4-3 to advance to its first-ever national championship match. The Mammoths completed the amazing journey with a 2-1 victory over Loras College.

The 2007 season marked Serpone’s debut at Amherst, and his team was immediately in the spotlight after rattling off 11 consecutive wins en route to a 15-2-1 mark. The 2008 season brought even more success as his team advanced to the national semifinals for only the second time in program history (first time since 1997). The Purple & White ended the 2008 season with a No. 3 ranking in the NSCAA national poll and has maintained its elite status ever since.

A historic 2012 campaign saw Amherst finish with an unblemished 17-0-3 mark, closing out the season having never trailed in a match. Racking up a 56-3 goal differential, Amherst enjoyed the best season of goal prevention in NCAA history, regardless of division. In 2013, the Purple & White increased their unbeaten streak to 40-straight games (30-0-5) dating back to 2012, the sixth-longest streak in Division III history, en route to their second consecutive Elite Eight appearance. Amherst earned its first-ever No. 1 national ranking during the year and finished with an 18-1-2 overall mark.

In 2014, Serpone guided the Mammoths to an impressive 14-1-6 ledger and a 7-1-2 mark in conference play. Amherst extended its conference unbeaten streak to 37 games dating back to 2011 and spanned four seasons (Oct. 26, 2011 to Oct. 18, 2014). The stretch, which included NESCAC tournament games, resulted in the seventh-longest run of that kind in NCAA Division III history.

Prior to his arrival in Amherst, Serpone served as the assistant men’s soccer coach at Duke University in 2006, helping to lead the Blue Devils to an 18-4-1 record, the ACC regular-season and tournament championships, and a No. 1 seed in the NCAA Tournament. Prior to Duke, he worked as a head assistant coach at Lafayette College (2001-03) and Northwestern University (2003-06), notably helping the Wildcats compile a record of 31-20-10 after they were a combined 9-42-4 from 2001-2003.

A native of Massachusetts, Serpone and his wife, Angela, reside in Hadley with their daughters, Lily and Annabelle, and their son, Tyson.