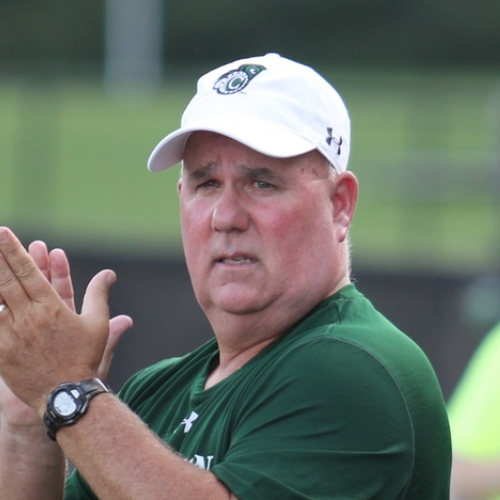 John O'Connor enters his eighth season at the helm of the Spartans in 2020.

Over his first seven seasons, O'Connor has led the Spartans to the 2017 North Atlantic Conference regular-season championship, tournament title and a berth in the NCAA Championship, the 2013 NAC regular-season championship and a share of the 2015 NAC title. O'Connor picked up his 200th career win in the Spartans' victory over Western New England in the 2015 ECAC Division III Tournament Quarterfinal. He was named 2017 NAC Coach of the Year - his third such honor.

O'Connor's 2013 squad posted an 8-1-1 conference record to earn the regular-season championship and top seed in the North Atlantic Conference Tournament before falling to eventual NAC Champion Thomas. Senior Nate Koenemann was named the Defensive Player of the Year and became the program's first NSCAA All-Region selection since 2010 when he was voted to the first team. Overall, O'Connor had five players earn NAC All-Conference honors and were himself named the NAC Coach of the Year as the team finished 13-4-2 overall.

Prior to Castleton, O'Connor served as the head coach for the University of Rhode Island from 2006-2012. During his tenure with the Rams he won an Atlantic 10 Tournament Championship and reached the tournament semifinals on two other occasions. Five of his former players went on to play professional soccer, and three of which played in Major League Soccer, including Geoff Cameron, a former member of the U.S. Men's National Team, Stoke City of the English Premier League and who now plays for Queens Park Rangers.

In addition to his work at the Division, I level, O'Connor also served as the head coach at Division III University of Chicago from 1995-2006. In just his second season the team reached the national semifinal and he was named the NSCAA Division III National Coach of the Year. He reached the NCAA Tournament again in 2001 and 2005 when his teams were ranked in the top-15 nationally. While at Chicago he also served as an associate professor in the Department of Physical Education.

From 1990-95, he spent five seasons as an assistant coach at Dartmouth under Bobby Clark, the present coach at the University of Notre Dame. He was a part of two Ivy League Championships with the Big Green, who reached the quarterfinals of the NCAA Division I Tournament twice during his tenure in Hanover.

He is active in coaching education through US Soccer and the United Soccer Coaches, works with the Vermont Olympic Development Program and is the Technical Director/Director of Coaching for Summit Futbol Club.

O'Connor resides in Rutland with his wife Sheila, the Castleton University Aquatics Coordinator, and their children Megan and Michael.