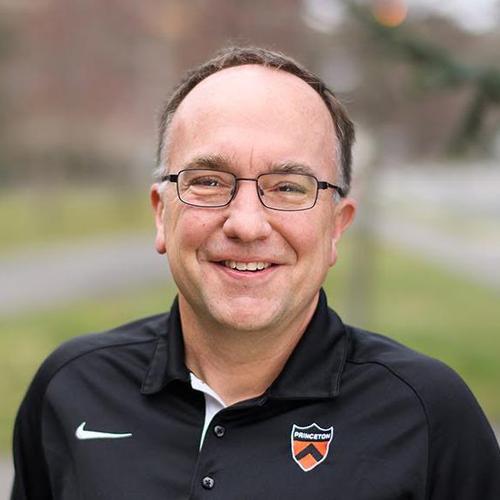 Coaching in the Moment

Jim Barlow begins his 23rd year at the helm of the Princeton men’s soccer program.

Princeton won the Ivy League and made its 10 NCAA Tournament appearance. It was a tremendous turn around for the team that started the year 1-3. Losing just twice over the next 14 games, the Tigers had a stretch of eight games in which they were unbeaten. Princeton can also say their season didn't end in a loss as they tied Michigan in the NCAA first round with the Wolverines advancing in penalty kicks in the 14th round. Nine players were named to the All-Ivy League teams with sophomore Kevin O'Toole capturing Offensive Player of the Year honors.

In the last decade, Barlow had guided the Tigers to two NCAA Tournament appearances and an unprecedented perfect Ivy League season in 2010.

For the third consecutive season, in 2016, it was the Tigers who had the Ivy League's leading goal scorer. In a calculated decision, Barlow moved defender Greg Seifert '17 to a striker in game 3 of 2016. He went on to score 11 goals for 26 points.

The 2015 season marked the second straight season the Tigers had a player ranked at the top of the national statistics en route to earning Ivy League Offensive Player of the Year Honors. Thomas Sanner '16 led the Ivy League in both points, with 31, and goals with 13 - scoring six more goals than another player in the league. Sanner ranks fourth in the NCAA in points per game (1.82), fourth in goals per game (0.76) and was 10th nationally in shots per game (4.06). Five of Sanner's 13 goals were game-winning goals as he helped the Tigers to a 10-5-2 record. He was later drafted by the Vancouver Whitecaps in the MLS SuperDraft.

The 2014 team can say something no other team in the nation could say - it ended the season with a nine-game unbeaten streak (8-0-1). Despite the streak and an 11-3-3 overall record, the co-Ivy League champion did not receive a bid to the NCAA Tournament. The Tigers were led by the Ivy League Player of the Year and the NCAA leader in points and goals per game, Cameron Porter. Porter was later signed by the Montreal Impact. Six others were named All-Ivy League, including defender Josh Miller who also received all-region honors.

Princeton was in contention for the 2013 Ivy League title until the final two weeks of the season and finished the year third in the standings with a 4-2-1 record. Four members of the team were named first-team All-Ivy League, more players than any other team in the league. Cameron Porter '15, who led the league in scoring, was a unanimous selection. He was joined by Thomas Sanner '16, Myles McGinley '15 and Josh Miller '16. It marked the fifth time Princeton had four or more players earn first-team honors in program history.

The 2012 team faced five nationally-ranked teams during the season and finished 8-6-2. With just one loss in the Ivy League, the Tigers finished third in the league with a 4-1-2 mark. Mark Linnville '13 completed the amazing feat of earning first-team All-Ivy League honors all four years of his career. He is just the second Tiger to earn four first-team accolades since Joe Thieman (90-93) and just the seventh play in the Ivy League to do so. Thomas Sanner '16 was awarded the Ivy League Rookie of the Year honor. He is the ninth Tiger to earn the honor, a list that also includes Barlow who won the award in 1987. During the season, Sanner was named the Ivy League Rookie of the Week four times in the first five weeks of the season, a first in Ivy League history. Princeton went 13-4-1 in 2010, earning the most wins in program history with a record 12-game winning streak. The Tigers posted the program's first-ever undefeated Ivy League season going 7-0 to be crowned the Ivy League champion and earned a bid to the NCAA Tournament. Princeton hosted UMBC in the first round and fell by one goal, 2-1. At the conclusion of the season, eight members of the team were named All-Ivy, three earned all-region honors, two were drafted in the MLS supplemental draft and one received All-America honors.

Princeton finished the 2009 season 9-6-3 overall and was 4-2-1 in the Ivy League finishing in third place. The Tigers began the season 4-0, the program's best start since 2001. Playing some unbelievably tough opponents, Princeton hit a rough patch in the middle of the season but rebounded to end the regular season undefeated in its last seven games, 5-0-2. Ranking as high as 10th in the RPI during the season, the Tigers earned votes in the national polls. All five of Princeton's losses during the regular season were to teams ranked in the NSCAA poll, and six of Princeton's opponents made the NCAA Tournament. The Tigers earned an at-large bid to the NCAA Tournament, for the first time since 2001, and earned the right to host the first-round game against Bucknell. In a game that featured the Tigers outshooting the Bison 22-11 and a lightning delay, Bucknell's goal in the 69th minute made the difference in the 1-0 loss. At the conclusion of the season, eight members of the team were named All-Ivy League, the more than any other school and the most selections for Princeton since 2004, and three earned NSCAA All-Region honors.

The 2009 season was not only special because of Princeton's return to the NCAA Tournament, but because of two significant wins. With the team's first win of the season, a 1-0 victory over Lehigh, Barlow surpassed his former coach and former U.S. National Team coach Bob Bradley '80 in the win column with his 93rd victory. Barlow won his 100th career victory two months later on November 7 with a 3-1 win over Penn.

A native of nearby Hightstown, N.J., Barlow was named Princeton’s head coach in 1996 at age 26 after his collegiate coach and mentor, former U.S. National Team coach and current LAFC coach Bob Bradley, left the Tigers to become an assistant coach for D.C. United of the Major League Soccer organization.

Barlow compiled 22 wins over his first three seasons at Princeton before coaching the 1999 Tigers to an impressive 11-5-2 record, an Ivy League title, and a subsequent berth in the NCAA Tournament. The Tigers earned their first outright Ivy League Championship since 1960 that season and took Virginia to triple overtime in the first round of the NCAA Tournament. Princeton’s 11 wins that season marked the second-highest single-season victory total in the program’s 94-year history.

Two seasons later, the 2001 squad finished with a 10-3-5 overall record and shared the Ivy League title with a 5-1-1 conference mark. During that year, Barlow coached Mike Nugent, Princeton’s first Ivy League Player of the Year since he won the award himself in 1990. Along with Nugent winning the league’s top honor, Matt Behncke took home the Roper Trophy as Princeton’s top male athlete of high scholastic rank and sportsmanship. Both Nugent and Behncke were drafted by MLS professional clubs later that year, as two of five players he has coached that have competed in the MLS.

The Tigers finished 3-2-2 in Ivy play in 2004, staying in the hunt for the league title until the season’s final weekend, and Darren Spicer ’06 was named the program’s third Ivy League Player of the Year after scoring a league-high 12 goals.

In 2005, Princeton rebounded from a slow start to finish 3-1-1 in its final five Ivy League games and 6-8-3 overall. The Tigers played a schedule that featured several teams ranked in the top 10 in the NSCAA poll, including an Akron team that would eventually be ranked No. 1 nationally.

Barlow continued to test his alma mater with top-notch opponents, as the 2007 and 2008 squads each faced five teams that competed in the NCAA Tournament.

A three-time first-team all-Ivy League midfielder, Barlow became the first Tiger to earn Ivy League Player of the Year honors capturing the award in 1990. In 1989, he helped the Tigers reach the NCAA Tournament for the first time since the 1979 season, and he was the 1987 Ivy League Rookie of the Year as a freshman. Barlow earned a degree in history from Princeton in 1991.

Barlow brings to Princeton a coaching resume that few college coaches can boast. From 2004-11 Barlow was the head coach of the United States Under-15 National Team. The Under-15 program aims to prepare players for the next step in their soccer careers and helps identify, evaluate and develop prospects for the Under-17 and Under-18 National teams. In 2009, on top of competing domestically in California, Illinois, and Missouri, the U-15 traveled to Madrid, Spain to compete in four friendlies with the city’s top youth squads. In the spring of 2010, the U-15 traveled to Argentina and went 2-0-1 against CA Argentino Juniors, Bolivia and Argentina.

Holding a U.S. Soccer “A” coaching license, Barlow has also been an assistant coach for the U.S. Under-16 National Team that placed fourth in the 2000 Tahuichi Tournament in Bolivia. He has also served on the USYS Region I staff, coached New Jersey and Maryland ODP teams, and the Princeton Soccer Association Under-16 squad. Prior to being named head coach at Princeton, Barlow was an assistant coach at American University for four years while earning a master’s degree in education.

Barlow is married to Patty Kennedy, an instructor in the Princeton University Writing Program. The couple resides in Montgomery.