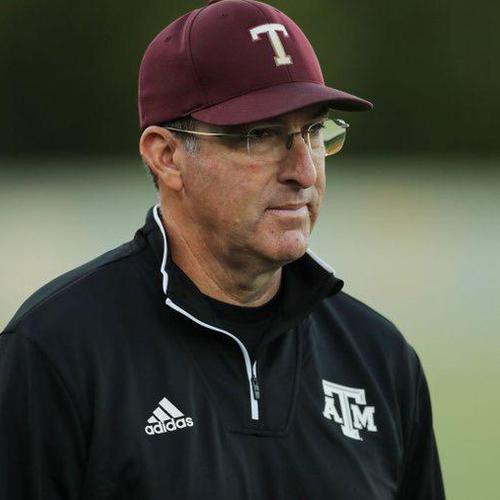 Entering his 28th season as the only coach in Aggie Soccer history, G Guerrieri has built the Texas A&M program from scratch into one of the elite sides in the nation and he has the Maroon & White planted firmly atop the Southeastern Conference.

One of the winningest coaches in the history of NCAA Division I soccer, Guerrieri has established Texas A&M as a premier program in the nation. Under his tutelage, Texas A&M is one of only four teams to play in every NCAA Tournament the last 25 seasons. Guerrieri has led the Maroon & White to 15 Sweet Sixteens, six Elite Eights and the 2014 NCAA Women's College Cup. Coach G's Aggies have consistently been ranked in the national top 25 over the past 20+ seasons while attracting some of the top soccer players in the world to College Station.

Guerrieri ranks fourth all-time among NCAA Division I coaches with 472 wins and eighth with a .746 winning percentage. He has guided Texas A&M to nine conference regular-season titles and eight conference tournament crowns. He is a four-time conference coach of the year and five-time NSCAA Central Region Coach of the Year. Guerrieri and North Carolina's Anson Dorrance are the only two coaches to lead a team to 25 consecutive NCAA Championship tournaments.

With Guerrieri at the helm, Texas A&M has established one of the greatest college soccer atmospheres in the country. The Aggies ranked in the top three in home attendance from 2002-19, including the nation's top attendance in 2003, 2004, 2006, 2007 and 2018. Furthermore, Guerrieri's teams have won 86 percent of their home matches since the Aggie Soccer Stadium opened in 1994. He also helped Ellis Field secure College Cup hosting bids on three occasions.

Not only have Guerrieri's teams fared well on the field, but all of the student-athletes that have completed their playing careers for him at A&M have either graduated or are on schedule to graduate. In so doing so, the team has annually maintained a team GPA above 3.0. In November of 2019, the Aggies again earned the United Soccer Coaches (USC) Team Academic Award (composite team GPA of at least 3.0 for all team members who appear on the official NCAA roster forms) for the eighth consecutive season.

In 2019, Texas A&M was the only NCAA Division I program to receive the freshly-minted Team Pinnacle Award, presented by the USC. A total of 17 collegiate women's soccer programs earned the award for the 2018-19 academic year for achieving a high level of fair play, educational excellence and success on the pitch, with the Aggies as the only squad from the top echelon. To be considered for the award, squads had to earn the USC Team Ethics and Sportsmanship Award and the USC Team Academic Award as well as register a winning percentage of .750 or higher during the respective season.

A native of Chicago, Guerrieri was raised in the Dallas area (Richardson), where he played for the powerful Sparta Blue club team, the top youth team in Texas at the time. Guerrieri also captained the J.J. Pearce High School soccer team as a goalkeeper. Following high school, he continued his playing career at the University of Tulsa. As team captain of the Golden Hurricane, he was honored as the team MVP in 1982 and was named to the 1981 All-Midwest team. During his career, he set most of the school's team and individual defensive records; many of which he still holds 30 years after graduation.

Following his graduation from Tulsa, Guerrieri served as an assistant coach for the men's programs at Tulsa (1985) and North Texas (1987 and 1990), and as the assistant men's coach and head women's coach at Rollins College (1986). Before coming to College Station, Guerrieri served as head coach for both the men's and women's soccer teams at Hardin-Simmons University and Richland College. His Hardin-Simmons women's team was the 1988 NAIA national runner-up and the 1989 NAIA regional finalist, earning him the Met Life/NSCAA Region Coach of the Year honor. Guerrieri's 1991 and 1992 Richland teams frequented the NJCAA national top-10 rankings in both the men's and women's divisions, and he was twice named Regional Coach of the Year.

While the head coach at Richland, Guerrieri served the soccer community in various capacities, ranging from director of coaching for the Dallas Flame Soccer Club, to goalkeeper coach for the North Texas Soccer Association's Olympic Development Program (ODP) from 1990-92. He was also a key personality in the development of the NDCCSA Classic League Soccer Facility at Richland. He later served as the USA Region III ODP Program Goalkeeper Coach from 1994-2001.