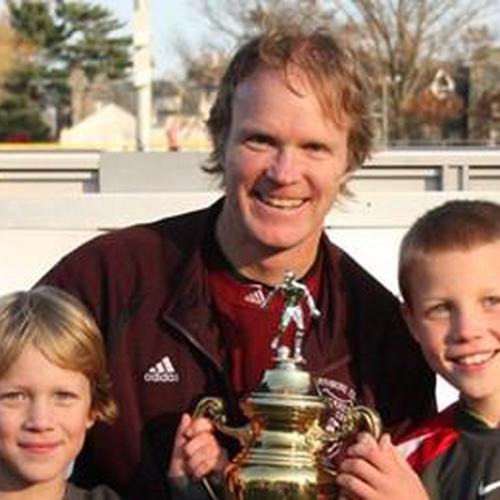 Greening the Game: Why Sustainability in Sports Matters

Eric Wagner took over the Garnet soccer program in 2002, transforming the team in short order. In 17 seasons, Wagner's teams have posted a 186-109-40 record, and have had 18 postseason tournament appearances.

In 2013, Swarthmore captured its third ECAC championship and posted an undefeated home ledger of 9-0-3 at Clothier Field.

Named Centennial Conference Coach of the Year in 2012, Wagner led the Garnet to a 16-3-2 record to steer the squad to the third round of the NCAA Tournament for the third time in five years.

In 2011, the Garnet won their second ECAC championship, defeating the top two seeds en route to the title. In 2010, Wagner's Garnet squad posted a 16-1-4 record, won the Centennial Conference Championship for the second time in three seasons (2010, 2008) and reached the NCAA Tournament for the third-consecutive season (2008-10). The 2010 season also saw the Garnet earn a No. 1 national ranking for the first time in program history.

During the 2008 and 2009 seasons, Wagner led the Garnet to back-to-back NCAA Sweet 16 appearances. For his coaching efforts during the breakthrough 2008 season, Wagner was named the Centennial Conference and Mid-Atlantic Region Coach of the Year.

In more than 25 years of coaching at the college level, Wagner has earned a reputation for developing talented young soccer players and turning teams into nationally competitive programs. Emphasizing intelligent, creative attacking play, an honest work ethic, and hard-nosed, disciplined defending, Wagner's team had a +36 goal differential in '10, the best in program history.

He played four years of Division III soccer for the Connecticut College Camels, after which he served as the assistant coach of the women's team at his alma mater. He helped the Camels earn the school's first-ever ECAC Championship in 1988. He was an assistant coach at Wheaton College (Mass.), Duke University, and at The University of Notre Dame. In 1993, he was selected as the first head coach of the new varsity soccer program at Southwestern University in Texas. In 1997, Wagner moved to St. Mary's College of Maryland, where he became the winningest coach in the college's history.

Wagner has also coached baseball and tennis at the college level. He has been a staff coach in four states' Olympic Development Programs, and a member of the Region 1 ODP staff. Wagner's teams are always active in the community, with service projects, youth soccer clinics, and community outreach throughout the year.

Wagner's playing career includes four years of NCAA soccer, one year with the Heidelberger Sport Club in Germany, two seasons in Raleigh, N.C. ('92 State Champions), two years in Austin, Tex. and a year of semi-pro soccer in Hartford, Conn. His connections to Swarthmore College go back several years, as two of his sisters graduated from Swarthmore. Lise ('85, Political Science) and Karin ('90, Religion) are two of the Garnet's most dedicated fans. Wagner lives in Swarthmore with his wife, Leslee, and their sons, Camden and Nicholas.