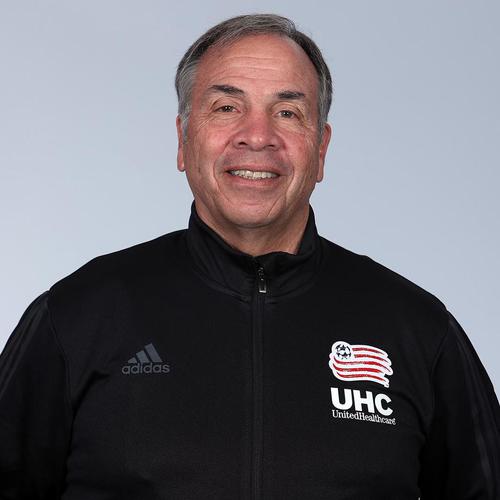 A Conversation with Bruce Arena

Arena made his return to the Audi MLS Cup Playoffs in 2019 by leading one of the most remarkable turnarounds in league history. After a 2-8-2 start had the Revolution sitting in the last place in MLS by mid-May, Arena went unbeaten in his first eight games at the helm beginning on June 2, becoming only the fourth head coach to do so in MLS history. With Arena on the sidelines, New England finished the season with an 8-3-8 mark and claimed the seventh seed in the Eastern Conference, before losing a hard-fought battle with Atlanta United FC in Round One of the postseason. That turnaround came despite Arena only making one addition to the roster, bringing in Argentine striker Gustavo Bou via a club-record transfer in July.

The Long Island, N.Y. native joined the Revolution with one of the most decorated coaching careers in American soccer history that has spanned more than 40 seasons at the collegiate, professional, and international levels. Arena’s MLS resume includes a record five MLS Cup titles, three Supporters’ Shields, seven conference championships, one U.S. Open Cup title, and one Concacaf Champions' Cup across 14 seasons. Arena has earned three MLS Coach of the Year selections, tied for the most all-time, first winning the honor in 1997 with D.C. United before being recognized in 2009 and 2011 with the LA Galaxy.

With a regular-season career record of 210-124-97, Arena is the winningest active head coach in MLS and is one of two coaches in league history to have surpassed 200 regular-season wins and 700 career points, along with Sigi Schmid. He is tied with Schmid for the all-time in MLS Cup Playoff games coached at 50 (32-12-6), while his 32 playoff wins are the most in league history.

Before his time in the professional ranks, Arena began his head coaching career with one season at the University of Puget Sound (1976), before being named the head coach at the University of Virginia in 1978. During his decorated 18-year tenure at Virginia, he led the Cavaliers to five NCAA Division-1 National Championships, including four in a row from 1991-94, as well as six ACC Men’s Soccer titles (1988, 1991-95). While at Virginia, Arena coached a number of American soccer legends, including Claudio Reyna, John Harkes, and current D.C. United Head Coach Ben Olsen.

In 1996, Arena received an offer to lead the United States Under-23 Men’s National Team in the 1996 Summer Olympics in Atlanta. Shortly after the Olympics, he assumed the head role with D.C. United, where he led the Black-and-Red to a 61-35 record, including the first two MLS Cup titles in 1996 and 1997, and the Lamar Hunt U.S. Open Cup title in 1996.

Following the 1998 FIFA Men’s World Cup in France, the United States Soccer Federation turned to Arena, who helped the team qualify for the 2002 FIFA Men’s World Cup. In the tournament, Arena’s team recorded an impressive win over powerhouse Portugal and topped Mexico, 2-0, in the Round of 16 en route to the nation’s first appearance in the Quarterfinals in a 72-year span. That same year, Arena led the USMNT to the Concacaf Gold Cup title, one of his three triumphs in the competition.

In 2005, Arena won his second Concacaf Gold Cup ahead of the 2006 FIFA Men’s World Cup in Germany. In the 2006 tournament, the United States earned a 1-1 draw against Italy, but a 2-1 defeat to Ghana sent the USMNT home early.

The next season, Arena took charge of the New York Red Bulls, where he spent the end of the 2006 season and all of the 2007 campaign. In 2008, Arena joined the LA Galaxy for what would be an incredible nine-year tenure that included three MLS Cups in a four-year span and two Supporters’ Shields in 2010 and 2011.

Following his decorated career with the Galaxy, Arena rejoined the U.S. Men’s National Team in November 2016. In his second run as head coach, he lost only two out of 18 games at the helm, though the United States fell short of qualification for the 2018 FIFA Men’s World Cup.

A 2010 National Soccer Hall of Fame inductee, Arena was named the 2015 Werner Fricker Builder Award recipient, earning U.S. Soccer’s highest honor for his more than 40 years of service to the game.

A talented lacrosse player, Arena grew up on Long Island and would go on to attend Nassau Community College, where he played both lacrosse and soccer. Arena then transferred to Cornell University in 1971, whereas a goalkeeper, he led his team to the 1972 NCAA College Cup Final Four and earned the tournament’s Most Valuable Defensive Player award. During the 1973 season, Arena contributed as an assistant coach with Cornell, before then accepting a head coaching position at the University of Puget Sound.

Off the field, Arena has authored a number of books and is a member of the NJCAA Lacrosse Hall of Fame, after receiving induction in 2008. He and his wife, Phyllis, live in Boston. Arena’s son, Kenny, was an assistant coach under his father with the LA Galaxy from 2014-16, before joining the staff of Los Angeles FC in 2018, where he currently serves as an assistant coach.