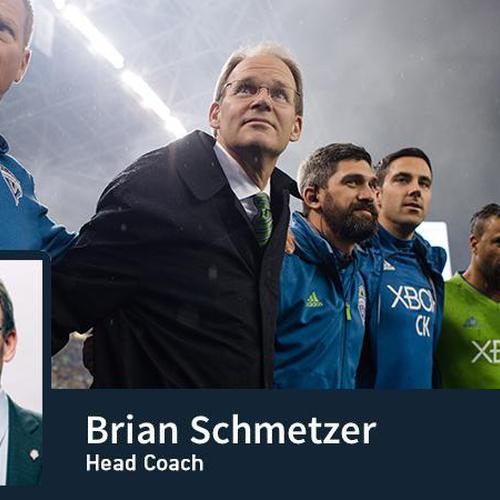 After leading Sounders FC to one of the most improbable comebacks in MLS history, Brian Schmetzer was named the club’s second-ever Head Coach on November 2, 2016. Upon assuming the interim manager role on July 26, 2016, following the departure of Sigi Schmid, Seattle sat in ninth place in the Western Conference with a 6-12-2 record. Under Schmetzer, Sounders FC finished the season with an 8-2-4 record and a fourth-place finish, becoming the first team in MLS history to make the MLS Cup Playoffs after having 20 or fewer points through the first 20 matches of the season. Less than five months after taking over as Head Coach, the club won its first-ever  MLS Cup.

A longtime Sounders FC assistant and former USL Sounders manager, Schmetzer entered his eighth season as Top Assistant Coach in 2016, a position he retained since December 22, 2008. He is one of the Puget Sound soccer community’s most recognizable and respected figures after playing and coaching for the region’s top professional franchises since 1980.

Schmetzer served seven seasons as the Head Coach of the Sounders’ United Soccer League’s First Division club from 2002-2008 before making the jump to MLS. He guided Seattle to USL-1 championships in 2005 and 2007, and Lamar Hunt U.S. Open Cup semifinal advancements in 2007 and 2008.

Schmetzer has 14 years of coaching experience and a 15-year background playing at the professional level. He was a member of six championship teams during that span. In addition to the two USL championships, his teams also twice won the Commissioner’s Cup for the league’s best record (2002, 2007), while also qualifying for the playoffs six of seven years. He was chosen USL-1 Coach of the Year in 2002 after going 23-4-1. The Sounders were league runners-up in 2004. His overall regular-season record in the USL era was 100-57-41.

A Seattle native, Schmetzer was coached by his father, Walt, as a youth. His team won seven out of 10 state youth championships. He signed with the Sounders’ North American Soccer League franchise following his graduation from Seattle’s Nathan Hale High School in 1980. He played three seasons as a midfielder for Seattle before going to Tulsa for the final NASL season in 1984.

In 1985, Schmetzer played on loan to FC Seattle, scoring twice in a 2-1 friendly win over Brazil’s Santos. While with Tacoma and FC Seattle, Schmetzer’s teammates included younger brothers Andy and Walter.

Schmetzer and his wife Kristine have six children between them.