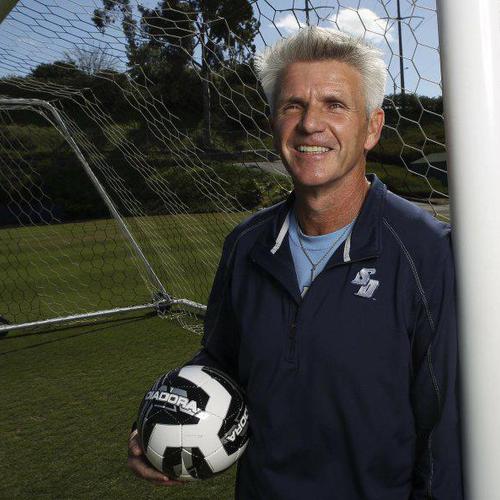 Brian Quinn will enter his third season as head coach of the San Diego men’s soccer team in 2020, and few men have impacted the sport in the city more than Quinn.

Born in Belfast, Northern Ireland, Quinn moved to the United States in 1981 to play for the outdoor Los Angeles Aztecs, but it was in San Diego where he would soon make a significant mark. Quinn played on eight straight San Diego Sockers indoor championship teams when that collection of international personalities regularly filled the old San Diego Sports Arena.

Quinn earned his U.S. citizenship, shifted his playing focus to the outdoors, and earned 48 caps for the United States national team. In all, Quinn played 16 professional seasons.

His playing days done, Quinn coached professionally in the Major Soccer League and locally at the highest youth levels. As the girls varsity coach at The Bishop’s Academy, Quinn led the Knights to San Diego Section high school titles.

Having coached at San Diego now for 13 seasons, Quinn feels a special connection to the university.

He carries a deep belief in the university’s mission to develop students who serve in the community. When he was telling the team about a volunteer program working with students at nearby Montgomery Junior High, Quinn grabbed his USD shirt and told his players, “It’s all about the shirt and how we wear the shirt!”

“It’s a place where I feel like being a coach it’s more like a vocation,” Quinn said. “I want to leave USD a better place than when I started. You want to be influential with kids. Sometimes it’s with a conversation. Sometimes it’s through action.”

Quinn doesn’t just tell his players how to play the game. He steps in and shows them. When the Toreros might be down a man during drills, the 59-year-old Quinn jumps in and fills the void.

In 1997, Quinn became the youngest coach in Major Soccer League history. In 2013, he was inducted into the Indoor Soccer Hall of Fame and the Breitbard Hall of Fame, which honors San Diego sports.

Quinn is married to Sharon and the couple has six children – Nicola, Damien, Danielle, Cailin, Sinead, and Aodhan. They have 12 grandchildren.